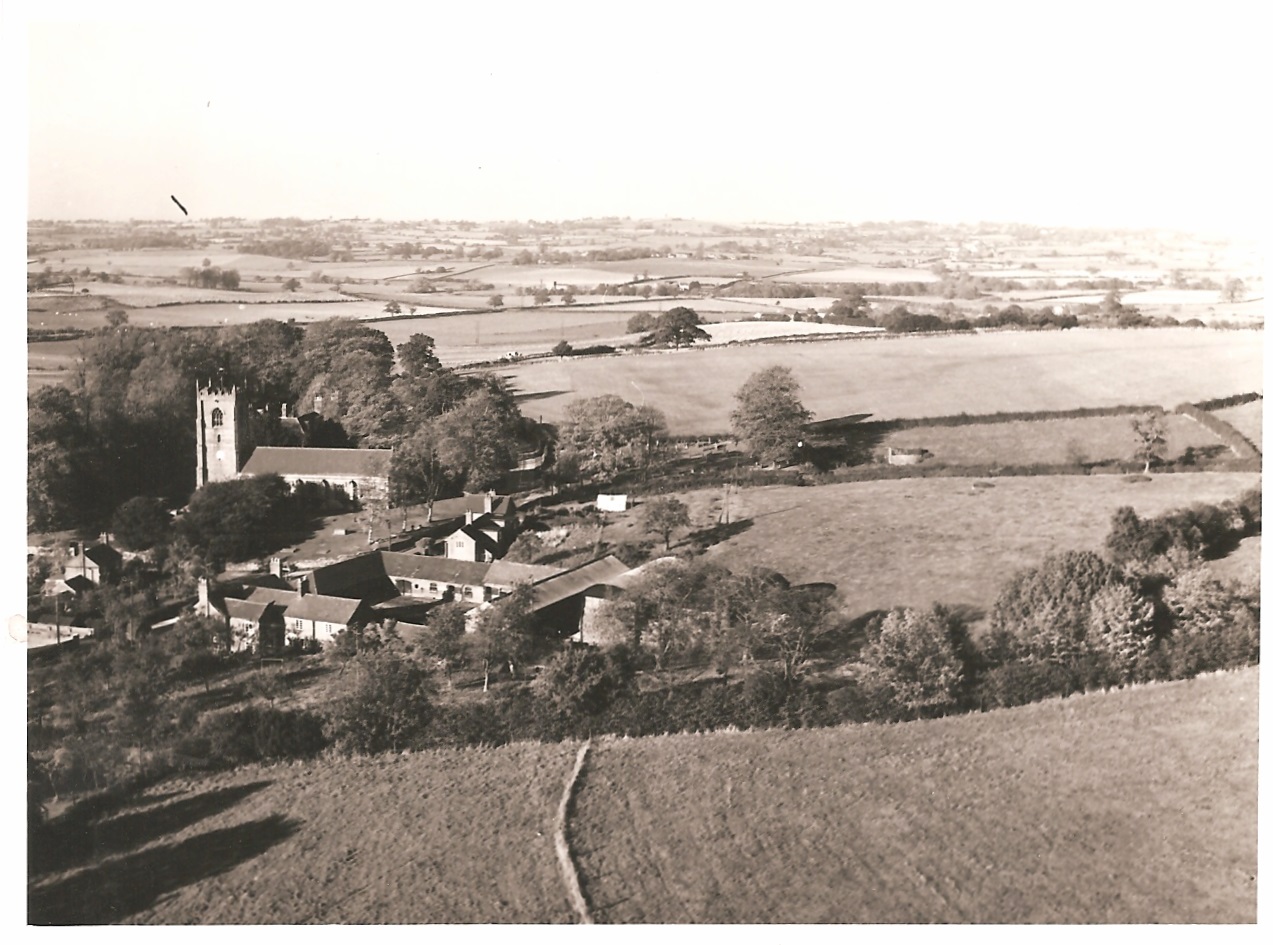 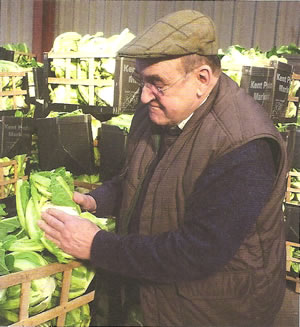 The unpredictable weather is a focal point for many growers and none more so than brassica grower Geoff Philpott. He studies the weather avidly from his coastal farm in Broadstairs on the Isle of Thanet, Kent. For him, the weather is not so much the bane of his life but a passion and a hobby.

His farm, which stretches onto a cliff edge that boasts a picturesque lighthouse. is in the most south-easterly tip of the country and has its own microclimate that is ideal for growing cauliflowers. “It’s difficult to grow good quality cauliflower – they do not like wet feet,” he says. “But we are up in the most frost-free part of the Isle of Thanet”.

“It does not get quite so cold in the winter Dr quite so hot in the summer. Just two miles away from here the temperature is on average 20c lower.”

Philpott’s farm provides a relatively stress-free environment for the crop because the soil has a chalk sub-base, is “very alkaline” and only gets about 23 inches of rainfall. “The chalk gets us fairly free draining,” he says.

Philpott’s cauliflower fields are now as noticeable a part of the seaside town as its sandy beaches. More than half of the 240ha he farms are devoted to brassica, with the remainder being for his other crops including early and main crop potatoes and cereals

Philpott grows more than 100 varieties of cauliflower. “We grow from September right through until June so we need to have continuity,” he explains. “That’s why we overlap with so many varieties. All of the time we are growing three or four. There’s a whole plethora of varieties that you can grow.”

Half of his seeds come from the farm’s own seed business, that breeds new cauliflower seeds. “Tozer Seeds markets them for us throughout the country.” Philpott claims that many varieties in the UK have been bred with milder winters in mind.

“Unfortunately, everyone has banked on the fact that warmer winters are here to stay and breeders took liberties. They didn’t think we would get colder winters and a lot of them are breeding for a friendlier climate. I don’t think other growers are aware of this. Last year [like this year] was a hard winter, more difficult than normal, and winter is a difficult growing period. There will be milder winters but not with such frequency.”

Perhaps the breeders would be wise to listen to Philpott’s predictions. A week before most of Britain was covered under snow, he explains that we are now in a new 22-year sun cycle. “The sun cycle changed two years ago,” he says. “Overall, the product of this will be much colder winters. Last winter was a colder one, which is why in tile first six months of 20 1 0 the quality of brassica was appalling at times. The weather hit them.” 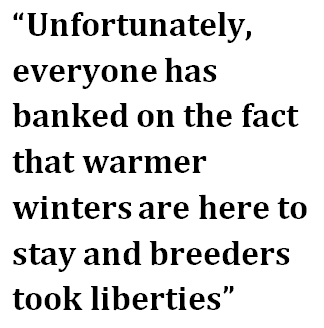 Years of experience and a love of growing have brought Philpott his wisdom. He has worked on farms since he left school at 17. He is now in his seven ties and has no intention of retiring any time soon. His decades of experience mean that he has got cauliflower growing down to a fine art. “We operate a no fungicide regime in cauliflowers and have done so for 12 years. This is because, over the years, we have learned a bit more about the cultural needs of cauliflower,” he says.

“We space the rows out so we have wider rows but have them planted closer together within the rows. That’s had a warming effect on the plants because it’s allowed more light below the canopy and more air movement. We are also using varieties that are slightly more resistant to disease. When the head is coming up we have to make Sure it’s well covered to protect it from sun, frost and rain – all three can discolour the
cauliflower. It’s a tricky operation and we are very fussy about planting dates.”

Philpott’s expertise has helped him survive in an industry that has drastically depleted over the years as sales have reportedly shrunk by 35 per cent over the past decade. This depletion has partly been because of the poor returns growers have received from supermarkets and partly because the vegetable had been going out of fashion.

“The cauliflower growers in Thanet who supplied supermarkets have all disappeared over the years, whereas those [like me] who have found their niche in the free market are all still here. That is an important point,” says Philpott.

Some 75 percent of Philpott’s crop goes to the free market. The fact that supermarkets are not his main customer has enabled him to speak more freely about their impact. He has supported Brassica Growers’ Association (BGA) campaigns including “Save the Cauliflower” a couple of years ago and this year’s “Love Your Greens”, which has helped boost sales and returns to growers, he says.

“We are just beginning to turn a corner,” he adds. “In Lincolnshire, I understand that they have had better prices this summer. The average grower is getting around 40p now, but it was nearer to 30p a couple of years ago.”

He reveals that the BGA plans to continue promoting the vegetable, which, with his support and wisdom, hopefully has a sunnier future.
Return to the top of this page 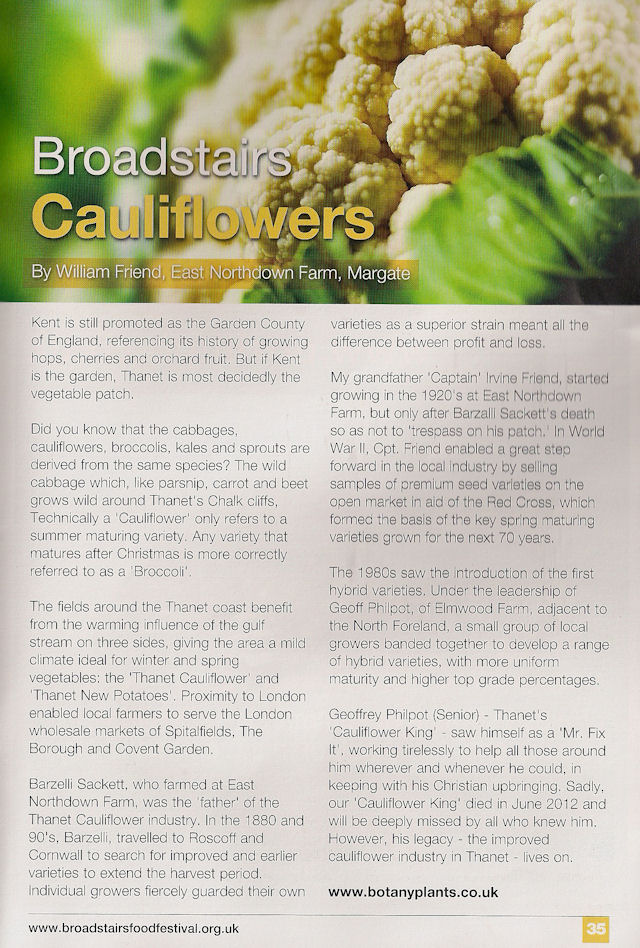 Return to the top of this page

Death of Staffordshire’s no 1 Ambassador

For 50 Years a Thanet Pioneer and Leader Major J. I. H Friend 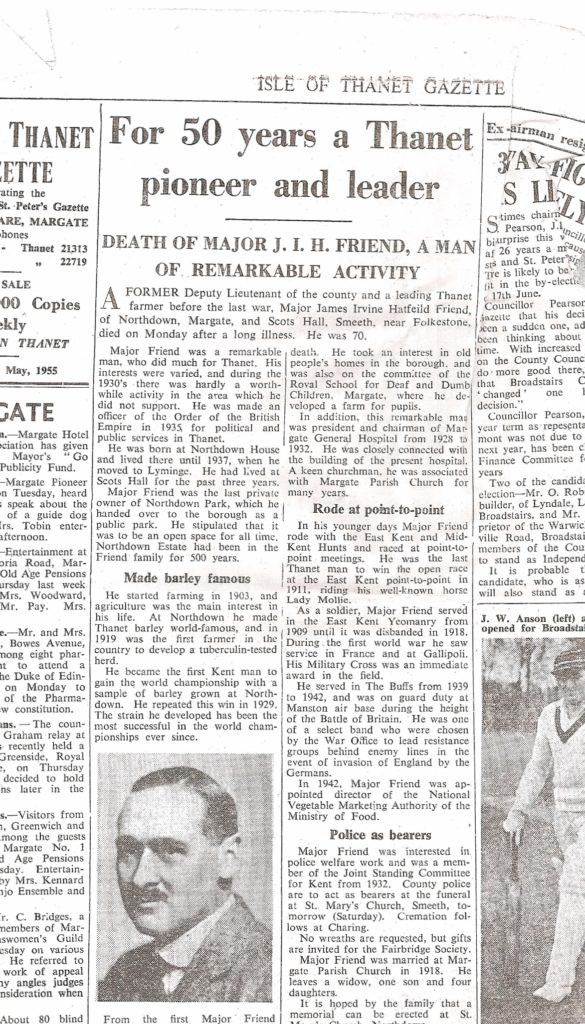 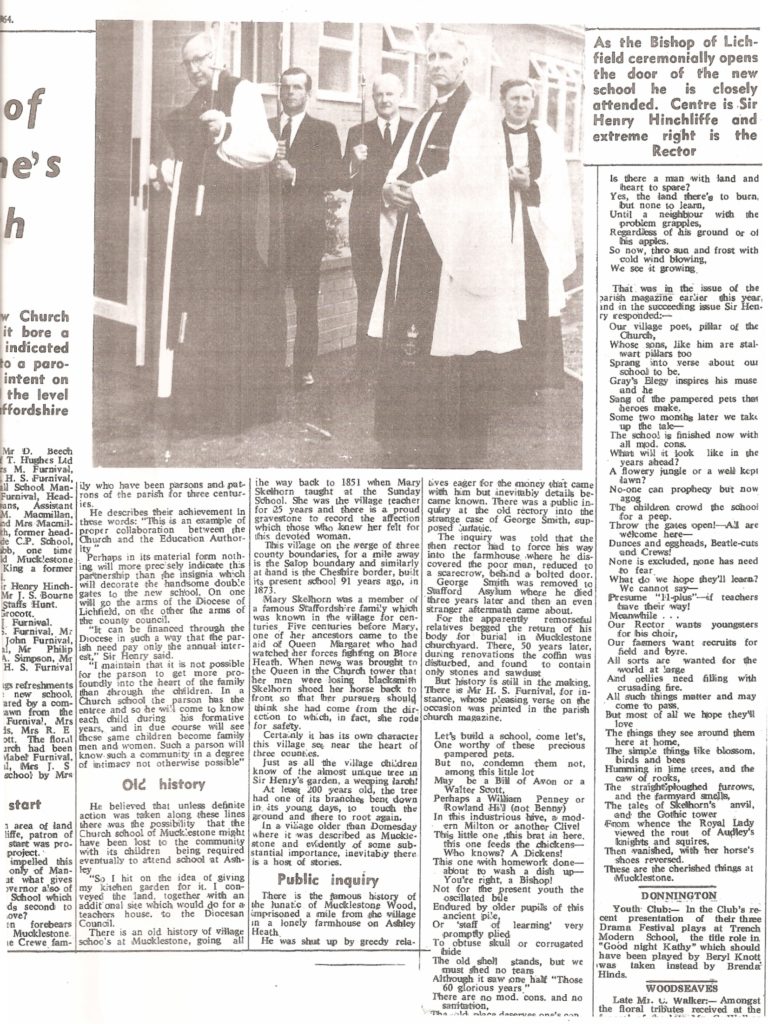 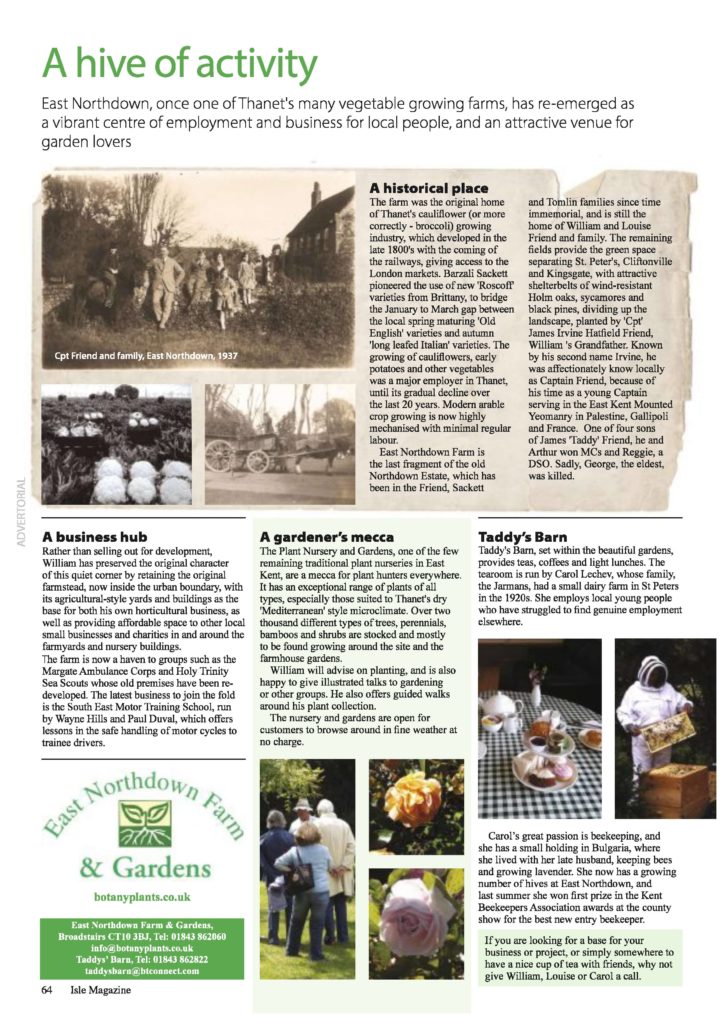