This year, 2021, marks the end of the 35 year term of the lease of the Northdown Park Coach House . The lease was granted to Mr. Peter Miles of East Northdown House , on the basis that TDC must maintain the whole Park and the properties within it ‘as a public park forever’ . I.E in  beneficial public use,  as set out in the 1937 covenants, not sold off for private gain . 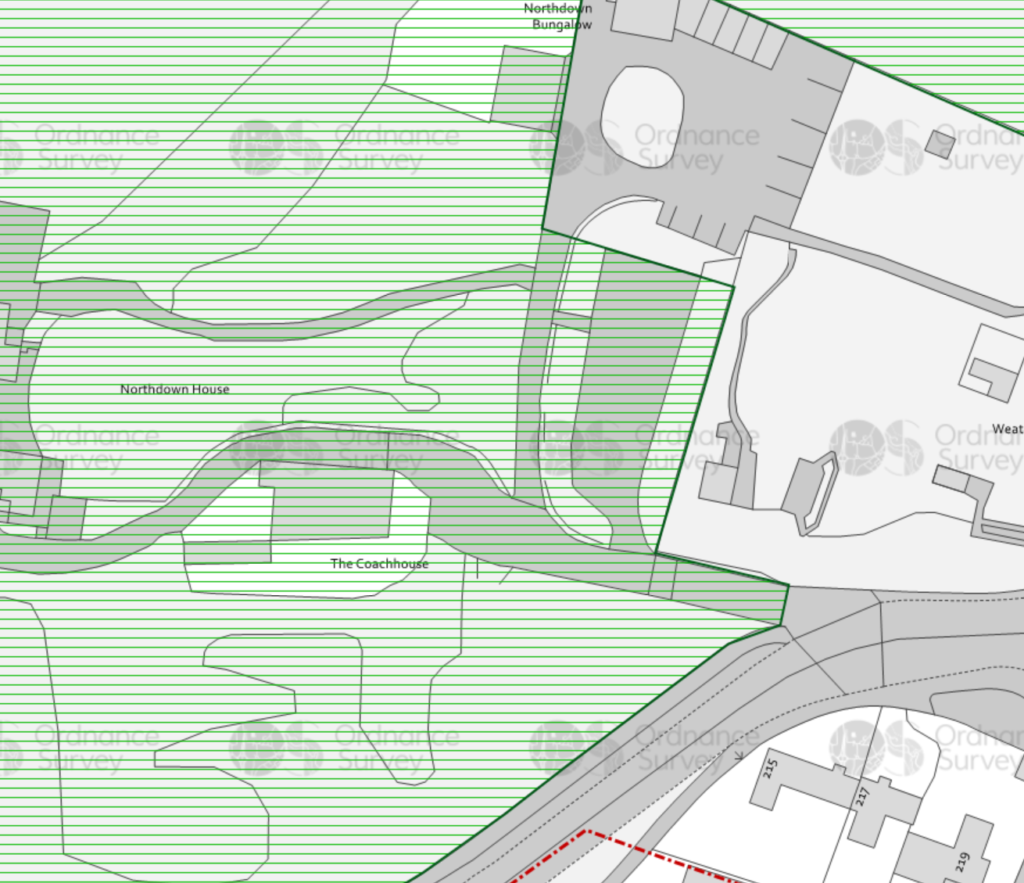 I have highlighted the key points on this scanned copy of the lease.  This lease and the title deeds of the park below are both publicly available documents available from the land registry.  I have tried below to fairly represent the true facts in this matter using the opinion of others in public documents and witness statements and testimony given under oath in response to prior ‘attacks’ on the covenants and allegations against those opposed to such breaches of the lease terms and covenants .  The terms of the lease and conveyance were put in place solely to protect the public interest and it is therefore the Chief Executives and leader of the council’s duty between them to ensure TDC does belatedly do so . 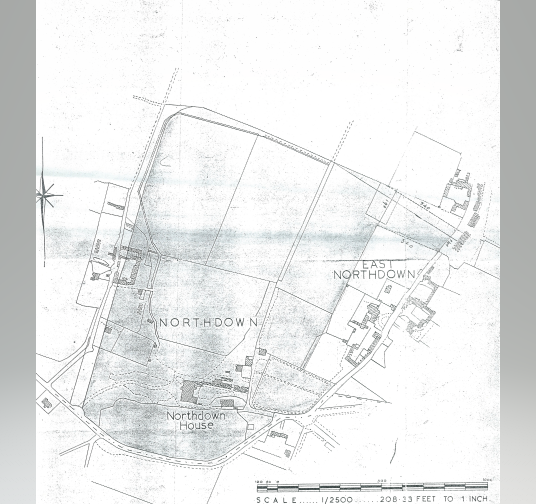 The title deeds of Northdown Park show my grandfather , J.I.H.Friend M.C. , O.B.E., JP , of East Northdown Farmhouse  as the vendor of the park. Restrictive covenants were put in place for the benefit of his successors in title to the retained land – East Northdown Farm ,  to ensure that the Margate ‘Burgesses’ and their successors TDC maintain the property for ever as a public park – they are not entitled to build anything unsuited to a public park, or dispose of any part of it . The public library , weddings venue for local people , garden gate project , and children’s soc. garden all fall within the types of acceptable public/ charitable uses, as envisaged. Removal of Thanet Leisure Force and the Garden Gate Project to make way for sales for development would not ! Attempts by council leader Cyril Hosier to demolish the house and buildings in the late 1970’s were defeated after a vigorous campaign, led by Cllr. Frank Matthews – leading to the restoration of the house as a functions venue run by Thanet Leisure force , and the first floor rooms as a Language school and restoration of the walled gardens as ‘ the Dell’ and ‘Frank Matthews memorial garden’ by the parks department team led by Bill Matthews of Dairy Cottage , and ‘park keeper’ Ray Baker of Northdown Bungalow.

Alarm bells rang , with my father , in August 1986 when it became apparent that Mr. Miles had taken the lease of the Coach house .  TDC chief exec. Ian Gill spelt out to Mr. Miles in August 1986 that he must observe the covenants on the property – put in place by my grandfather for the benefit of his successors at East Northdown Farm, and successors of Sidney Van De Burge , of Palm Bay Estates. and the terms of the lease , that the property must be used for public benefit as a museum . 35 years on it can be seen that Mr. Miles never intended to observe either the covenants or the lease terms . 3 months on from the end of the lease , he is still refusing to vacate quietly , as stipulated in the terms.                       .  0 86 08 05 M to Gill      . 0 86 08 08 Gill to M

Mr. Ezekiel was either genuinely unaware at this time of the covenants – or otherwise thought there would be no serious public opposition to their being ignored .

Sketch plan, prepared by TDC Officer Doug Brown, from the Council agenda of 2008 for the redevelopment of Northdown House, Garden Gate and Coach House.

An 1,800 person petition was raised against the sale of these buildings and land in Northdown Park for redevelopment.

TDC legal department recognised that were the buildings to be sold off in breach of the covenants the costs of compensation would exceed the proceeds. 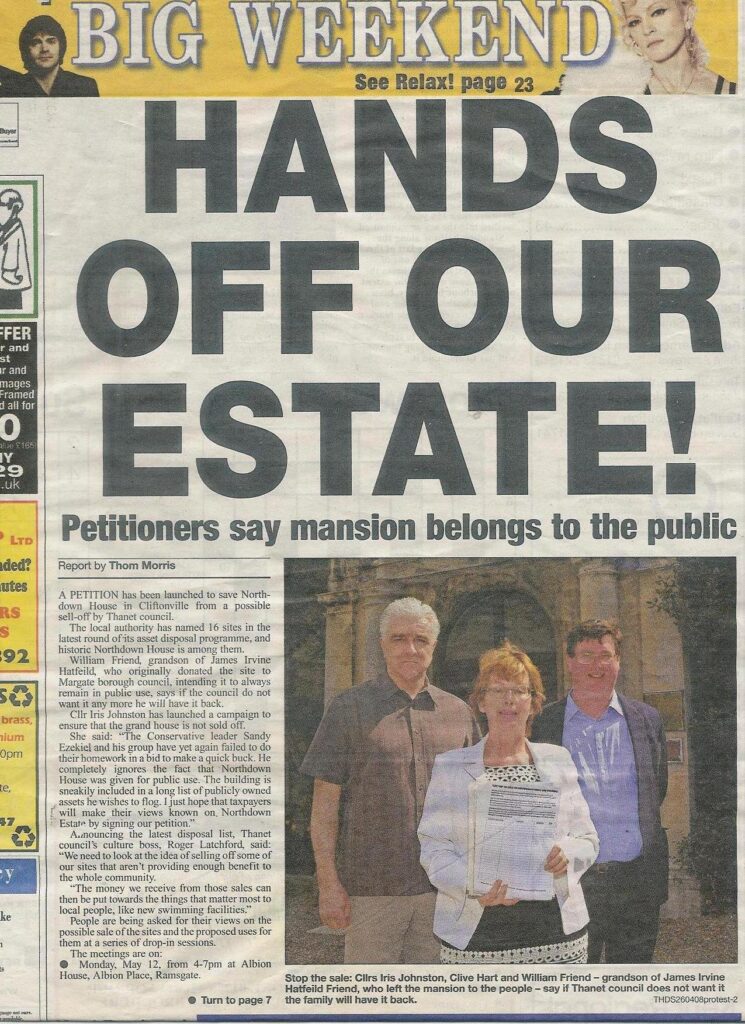 following the 2008 consultation into the future uses of the buildings in the park , investigations were started into the failure of the leaseholder of the Coach House to use the building for the public use – as a museum – specified in his lease (see above Cl 16 ) .

The monitoring officer sums up the issues surrounding the Coach House lease , and the failure of the leaseholder to implement its terms . The 35 year term of lease was to expire on 16th May 2021 .

Following the giving of this witness statement to the coach house working party , I received an intimidatory letter before claim for defamation from Mr. Miles’ solicitors . My statement was my truly held opinion , given in evidence to a public enquiry into past events- not defamation. Similar solicitors letters were sent to Carol Russell who also gave evidence . 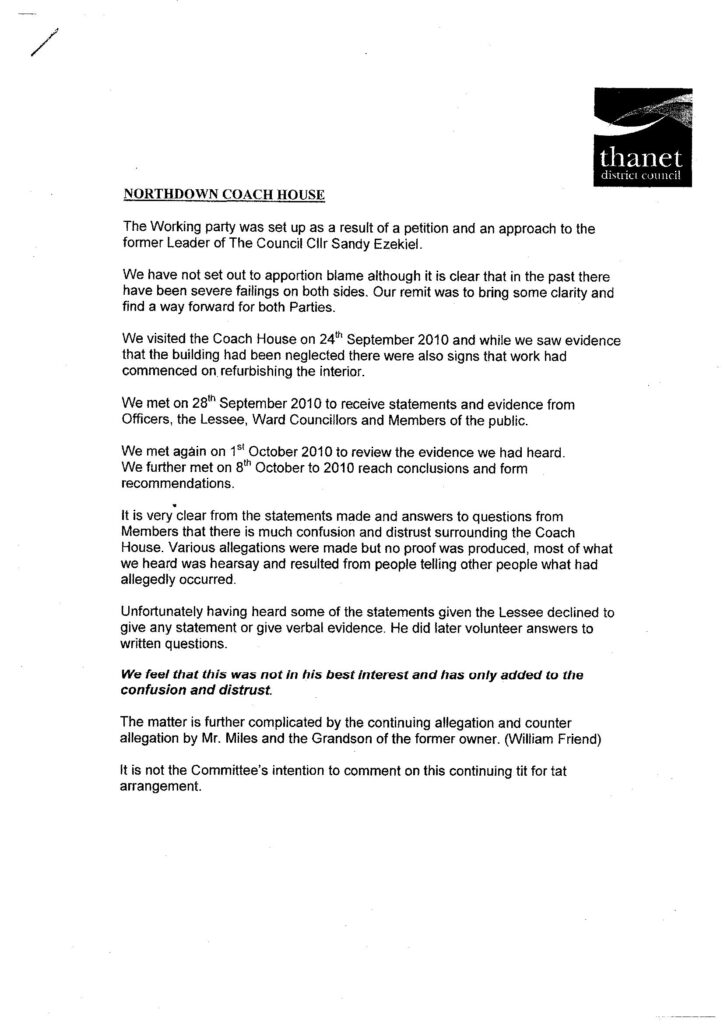 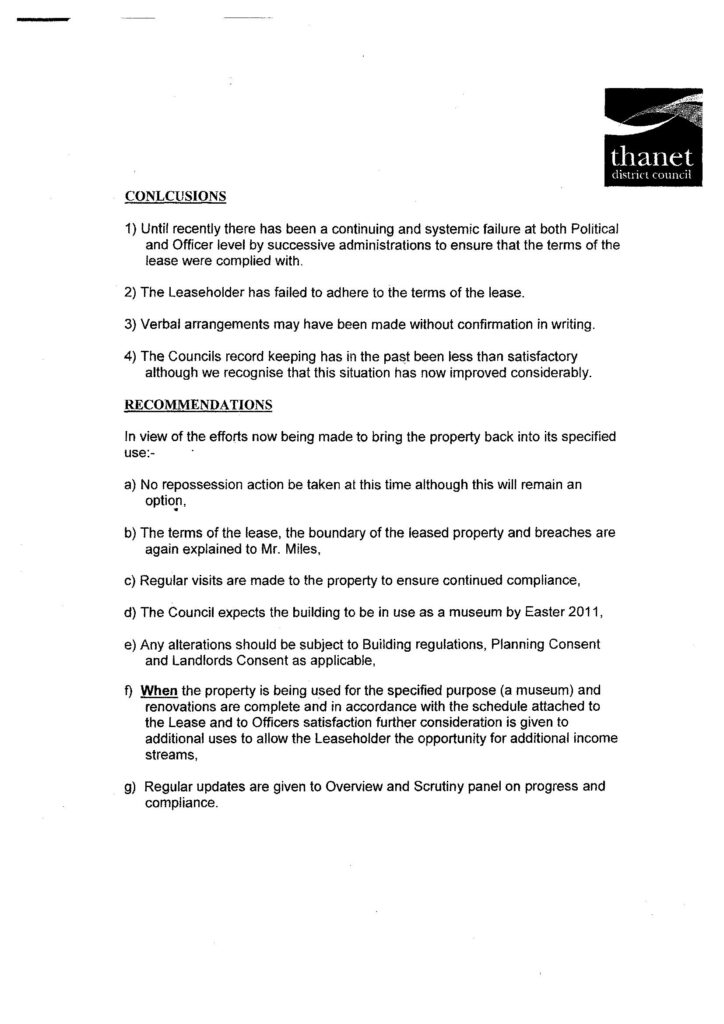 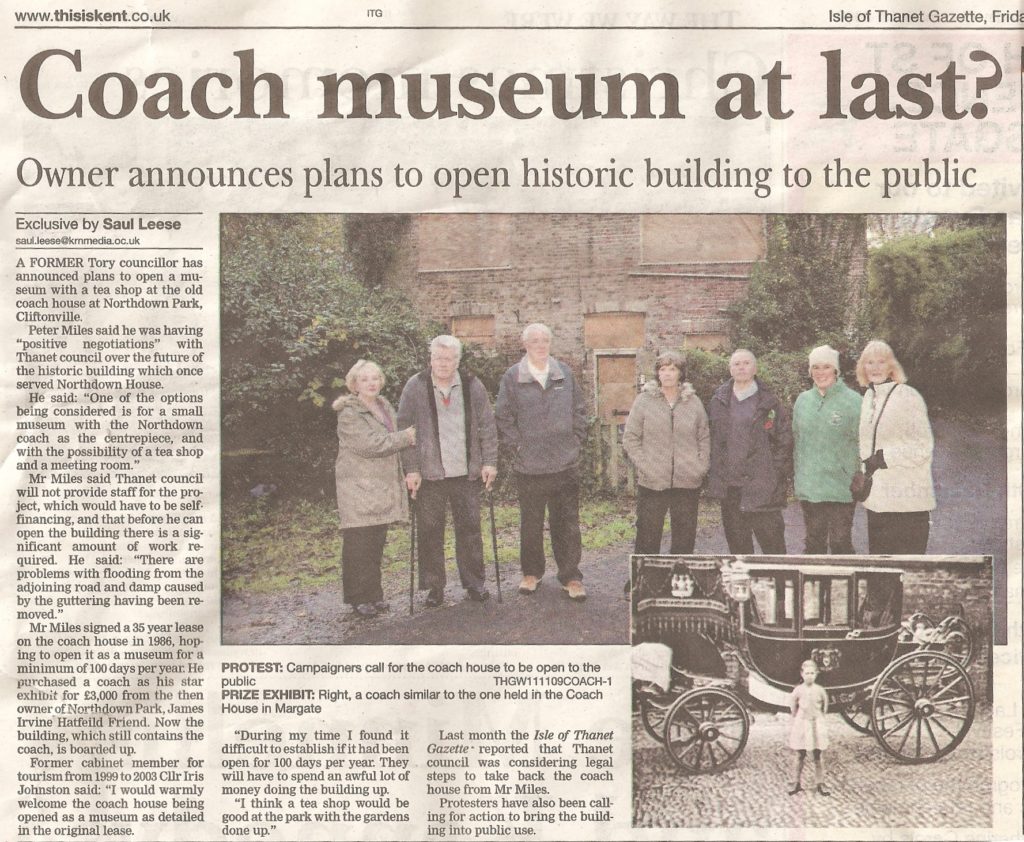 The coach house working party recommended giving the leaseholder a further opportunity to comply with the terms of the lease by opening the museum in accordance with the terms of the lease by Easter 2011.  Unfortunately around this time the estates officer Justin Thomas , tragically died. Even after it became apparent that Mr. Miles had no intention of belatedly complying with the lease, Cllr. Wells still supported the leaseholder, putting forward the view that the costs of terminating the lease early for breach of conditions would be prohibitively expensive for TDC to bear, given the leaseholders litigious reputation – so the leaseholder has been allowed to remain- until the end of the lease !  Mr. Miles moved his brother and partner into the Coach House at this time , and they moved out in April 2021 .

In 2012 Cllr. Wells  brought allegations to the Standards board against Councillor Johnson regarding her role (as one of the Burgesses of Margate to whom the park was conveyed in 1937 ) in opposing the misuse of the coach house .

again I was ASKED to give evidence

again my statement was my truly held belief , given as evidence to an adjudicating body upon their request in response to an prior ‘attack’ by the opposing party , so is not defamatory .

Cllr – Johnson was fully exonerated . The investigations into this claim led to a wider investigation by the monitoring officer into asset management fraud and vexatious complaints.

. 12 08 23 Harvey Patterson restricted report to Cabinet re Coach House     Again officers put the case of the Coach House to Cabinet , and again Cllr. Wells and others won the argument , that the financial implications on taking forfeiture proceedings against Mr. Miles too great.   A decade on these legal costs of trying to evict Mr. Miles prematurely have now been avoided . Any argumentsthere may have been to avoid such eviction no longer apply as at the end of the term on the lease came and went on 16th May 21, when the leaseholder was to vacate the ‘demised premises’ freely (Cl 27) .

This monitoring officer , Harvey Patterson thereafter  left TDC.  gain in 2016 , under Cllr. Chris Well’s tenure as UKIP leader of the council , the coach house and garden gate area were again placed back on the asset disposal agenda . 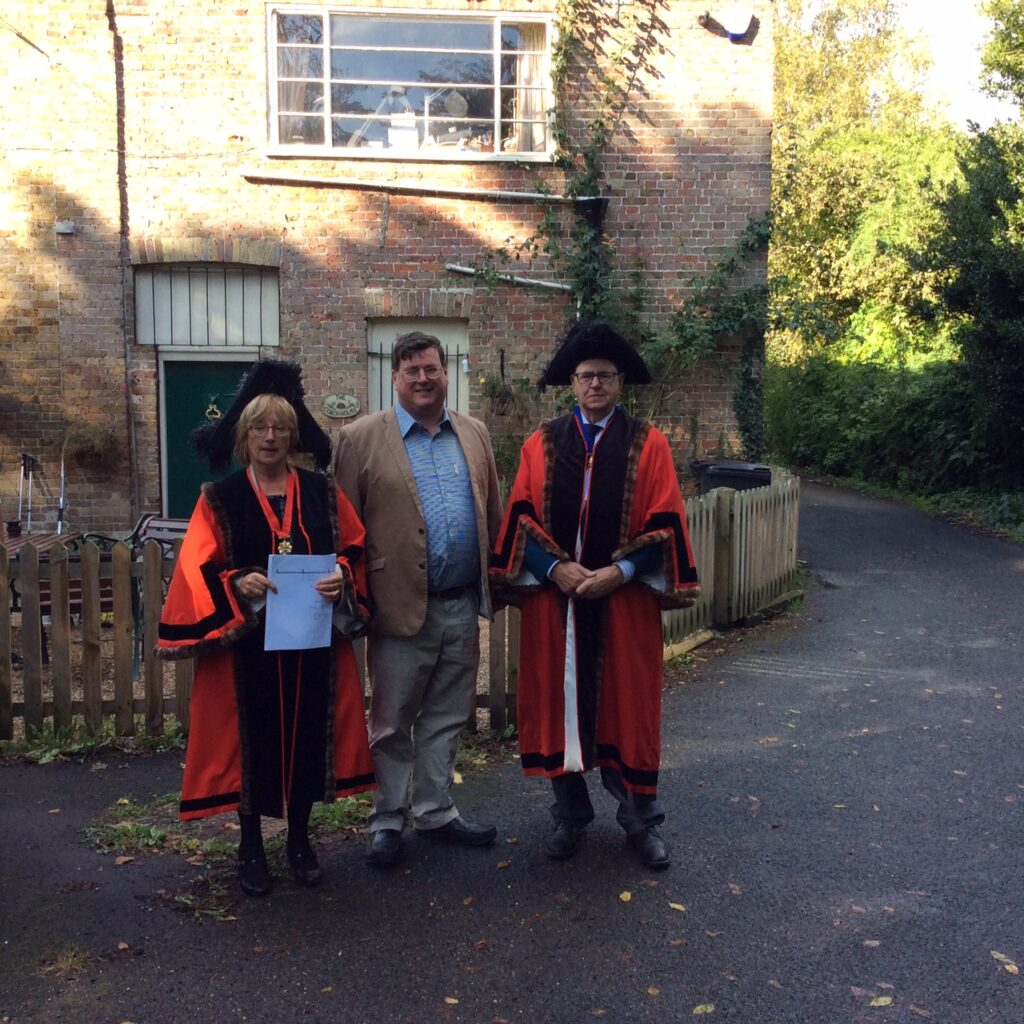 Margate Burgesses , Iris Johnston(lab) and Mike Tomlinson(con) , both objected  to the failure of TDC to recognize the terms of the 1937 conveyance and failure to secure compliance with the terms of the lease .

Again ,leader Chris Wells , reported them to the Standards Board for bringing their office into disrepute.  This was part of a long established pattern by this small group of former SthThConAssn councillors. 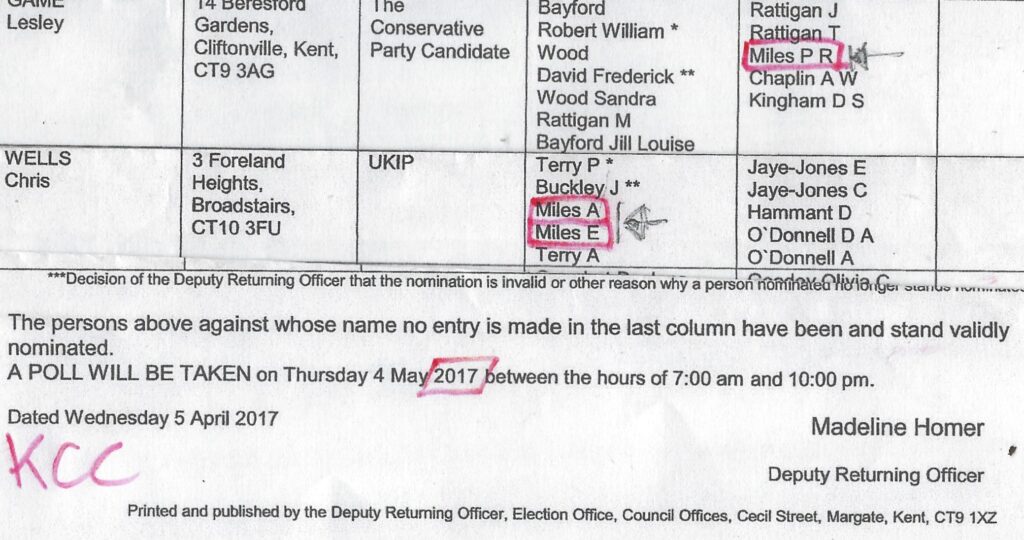 The Leaseholder reported the Thanet Gazette to the press complaints board – they also were fully exonerated .

At this time , October 2016 , my firm of solicitors set out to TDC the issues regarding the coach house and problems with securing compliance with the terms of the  lease.

Meetings were held with the monitoring officer and Conservative leader Robert Bayford , and then with Mrs. Edwina Crowley and former labour leader Cllr. Iris Johnston to discuss the problems . It was established that the lease expires in 2021 and would not be renewed or extended . Contrary to the 2010 reports above, the option at clause 5 ix) of the lease to renew for a further term required the leaseholder to register a charge at the land registry within the first 3 months of the lease. , which, as can be seen from the 2006 title copy above it was not. Even if this option had been taken up , it also relies on the past and ongoing acceptance and compliance with the terms of the 1986 lease to open and use the property as a public museum only – these terms have not been observed.   The lease therefore ends in 2021 and must be surrendered in good repair without quibble. The leaseholder must compensate TDC for any dilapidations to the property. The leaseholder is also liable for any legal costs incurred by TDC in recovering vacant possession and /or recovering the costs of full repair to the property at the time of the handover . Whatever the future of the property beyond May 2021 , TDC is not be entitled to sell it at a concessionary figure to the leaseholder , or to leave the leaseholder in occupation , in breach of the terms , as either of these scenarios would clearly be against the public interest, against the terms of the 1937 conveyance and against the terms of the 1986 lease. Peter Miles’ brother vacated the Coach House in April 2021. TDC have given assurances that proceedings are now underway to secure vacant possession , full repair and delapidations and any legal costs incurred , following the end of the lease at the end of the 35 year term on 16th May, as they are legally obligated to do, by the covenants , the lease and for the public interest.

However, even after all that has happened ,  Mr. Miles remains in a position of influence in local politics as STCA , chairman of the Cliftonville sub-branch.  . STCA roles AGM 21  Even after the Cllr Wells, Wise and Ezekiel leaving local politics , Cons. ward councillor Cllr. Cedric Towning  now appears to have stepped into this breach to act as the leaseholder’s new sponsor  in local affairs, acting against Officer recommendations..

A string of suitable charitable organisations have expressed an interest in taking over the building such as RN50 Holy Trinity Sea Scouts, Paul Twyman of the Garden Gate Project and Ollie Briggs for Art Education Exchange , I have offered my services as an intermediary, if necessary, to take on the overall management of the building , if TDC wish to divest themselves of this responsability for doing so.